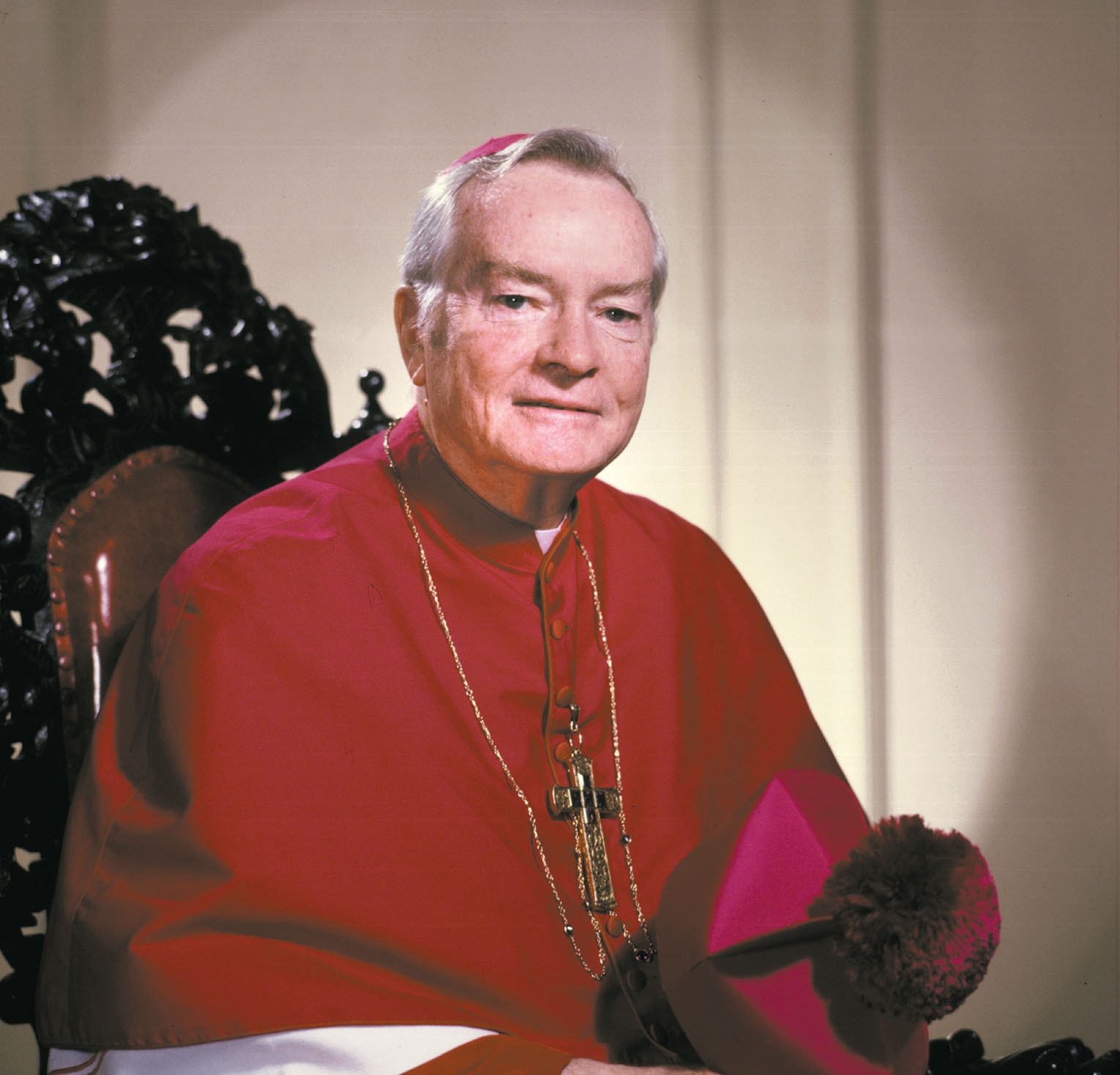 Philip Matthew Hannan was born in Washington, D.C. on May 20, 1913, the fifth of eight children (one girl and seven boys) born to Mr. and Mrs. Patrick Francis

Hannan. His father, an Irish immigrant known by friends and family as “The Boss,” came to the U.S. at 18 and found work as a plumber, building his trade into a flourishing business that weathered even the Great Depression.

He attended St. Charles College in Catonville, MD, and the Sulpician Seminary in Washington, receiving a master’s degree from Catholic University before going in 1936 to the North American College in Rome, where he experienced firsthand the growing tensions in Europe and the preparations for WWII. He holds a licentiate in theology from the Gregorian University in Rome and a doctorate in canon law from the Catholic University of America.

Ordained in Rome on Dec. 8, 1939, Father Hannan remained in Rome until the following summer, when all American seminarians were ordered by the U.S. secretary of state to leave to ensure their personal safety. Following his ordination, he was assigned by Archbishop Michael J. Curley of Baltimore and served as an assistant for two years at St. Thomas Aquinas Church, Baltimore.

In 1942 he volunteered as a wartime paratroop chaplain and served with the 505th Parachute Regiment of the 82nd Airborne Division. After cursory instructions on the ground, he took five practice jumps in order to earn his official status as a paratroop chaplain. After his first jump, he was appointed “jump master” to a small crew of greenhorn jumpers and he affectionately became known as “The Jumping Padre.” Once asked if he feared jumping, Archbishop Hannan said relaxing and forgetting his dignity was the formula for safety. In 1945, as the horrors of Nazi prisoner-of-war camps became widely known, Chaplain Hannan liberated a camp of emaciated prisoners at Wöbbelin. Discharged in 1946 he held the rank of major.

After the war, Father Hannan was assigned as assistant at St. Mary’s Church, Washington. In 1948 he was appointed Vice Chancellor of the newly established Archdiocese of Washington and in 1949 completed his doctorate in canon law. In December 1955, Pope Pius XII raised him to the rank of Domestic Prelate with the title of Right Reverend Monsignor.

The New Archbishop of New Orleans

The appointment of Bishop Hannan to become the 11th Archbishop of New Orleans was announced in Washington on Sept. 29, 1965 – about three weeks after Hurricane Betsy had devastated New Orleans. At that time he was attending sessions of the Second Vatican Council in Rome. He flew to New Orleans on Oct. 12 and was installed the following day in St. Louis Cathedral by Archbishop Egidio Vagnozzi, apostolic delegate in the United States.

The new archbishop was immediately confronted with the problem of surveying the massive damage inflicted by Betsy. The archbishop personally visited the areas affected and disbursed funds and other relief goods and materials to those families affected by the storm (a gesture he repeated in 1969 following Hurricane Camille).

A Love for Education

Catholic education was a point of deep and abiding concern for Archbishop Hannan. While encouraging religious sisters and brothers to continue their work in Catholic schools, the archbishop realized the role that the laity must play in Catholic education. As far back as 1968 the archbishop encouraged the creation of the first elective Archdiocesan School Board, which in 1972 hired its first lay superintendent of schools. The archbishop also directed the board to create a new division with the Department of Education to conduct long-range planning for the system and to constantly review teacher salaries and retirement benefits.

The archbishop, with the approval of the Priests’ Council, set up a special fund to give financial assistance to schools in poorer neighborhoods of the inner city so that a Catholic education could be available to as many children as possible. The result was that some inner-city schools – faced with financial disaster – were able to continue operation. The establishment of the educational trust fund, resulting from the 1986 capital campaign, helped stem the tide of school closures.

Because of his leadership in helping to keep open as many inner-city schools as possible, more and more children from disadvantaged families were given the opportunity to receive a Catholic education. Black students made up 45.4 percent of the Catholic school enrollment in the city of New Orleans during 1987-88.

The people of St. Bernard Parish had been requesting for years the construction of a Catholic high school. The Archbishop promised to build them a high school and in 1987, and he fulfilled that promise with the opening of Archbishop Hannan High School in Meraux, the first and only Catholic high school in St. Bernard Parish. When deciding on the school’s name and vision for the school, the people of St. Bernard Parish agreed that the school should be named in honor of the Archbishop and it’s vision would reflect his commitment to education, the poor and living the Gospel of Jesus Christ. Archbishop Hannan High School grew steadily, developing pristine academic and athletic facilities. The school was forced to relocate to the northshore after the devastating flooding from Hurricane Katrina in 2005. It reopened temporarily on the grounds of St. Joseph Abbey and then moved to a new campus in Goodbee for the 2008-09 academic year.

Archbishop Philip M. Hannan died on September 29, 2011. His charism, legacy and memory live on in the hearts and lives of every Archbishop Hannan High School graduate.